One of the first blog posts I did was a DIY lotion that didn't turn out so well.  My sister-in-law suggested I try it as a lubricant for squeaky hinges.  I thought that was so funny and not a typical use for lotion I just had to try it.

I had the perfect squeaky door to test this on.  I rubbed some of the lotion on both sides of the hinge then I opened and closed the door several times. 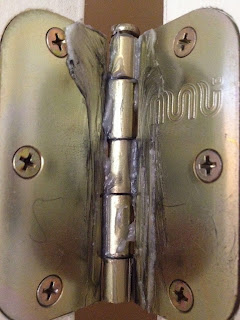 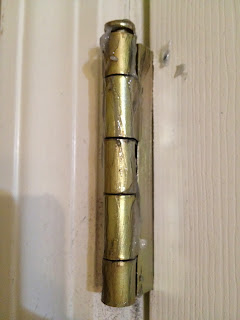 I put a rag under the hinges in case it dripped and I let it sit for 10 minutes.  I came back, opened and closed the door a few more times to make sure the lotion was getting in the hinge then I used an old rag to wipe it all off.

The Verdict: A year later and there is still no squeak on that door.  It worked so well! It was easy to clean up and didn't leave any residue.

This got me curious of course.  Would any lotion work?  Or just ridiculously greasy lotion?  So I found a regular store bought lotion and I found another squeaky door and tested the regular lotion.

The Verdict: It worked a little bit, enough to notice a difference, but the door still squeaked.

So then I got some coconut oil and tried another door (3 squeaky doors in one house, you think I would have taken care of that as soon as we moved in)

The Verdict: The coconut oil worked just as well as the DIY lotion.

Email ThisBlogThis!Share to TwitterShare to FacebookShare to Pinterest
Labels: Misc.

Is there a DIY that you have been wanting to try but don't want to spend the time or money in case it fails? Let me try it for you. Send me a request at thediyguineapig@gmail.com.